In response to reports from outreach gynaecologists of excess cases of vulvar cancer and its precursor lesion, vulvar intraepithelial neoplasia (VIN), in the East Arnhem (EA) health district, investigations were undertaken from 2007. Funding was acquired from the National Health and Medical Research Council (NHMRC) for three projects investigating the epidemiological features and potential causes of the cluster (2007-2010; 2011-2013; 2014-2017).

Vulvar cancer is a relatively rare malignancy and has consequently not been well studied. Squamous cell carcinoma (VSCC) comprises the majority (>90%) of vulvar cancers.1 Mortality rates have remained steady, or increased in some regions, and patients suffer from associated morbidities that reduce quality of life.2-4

There are two distinct aetiological pathways for VSCC, resulting in separate forms of the disease.1,5,6 One is associated with infection with human papillomavirus (HPV), usually affects younger women, arises from vulvar high-grade squamous intraepithelial lesions (HSIL) (formerly usual type VIN (uVIN))7 and results in basaloid or warty carcinoma. The other variant is HPV-independent, usually affects postmenopausal women, is associated with differentiated VIN (dVIN) arising in an area affected by vulvar dermatoses such as lichen sclerosus, and leads to keratinizing VSCC.

Treatment for VSCC and VIN has evolved only marginally and continues to be associated with substantial physical morbidity and psychosexual dysfunction.8,9 Vulvar neoplasms are largely treated through surgery, irrespective of disease sub-type. A trend towards less radical surgery and an increase in the use of sentinel lymph node biopsies has gone some way towards reducing morbidity for patients with localized disease without affecting survival.8,10

2. Epidemiology and Confirmation of a Cluster

An initial epidemiological study was undertaken in 2007-08 in order to describe the epidemiological feature of this possible cancer cluster. NT-resident women with a confirmed histological diagnosis of vulvar cancer or VIN between 1 January 1996 and 31 December 2005 were identified. Seventy-one women were identified (32 vulvar cancer and 39 VIN), of whom the majority were Indigenous, aged less than 50 years and living in remote communities in the EA district.11 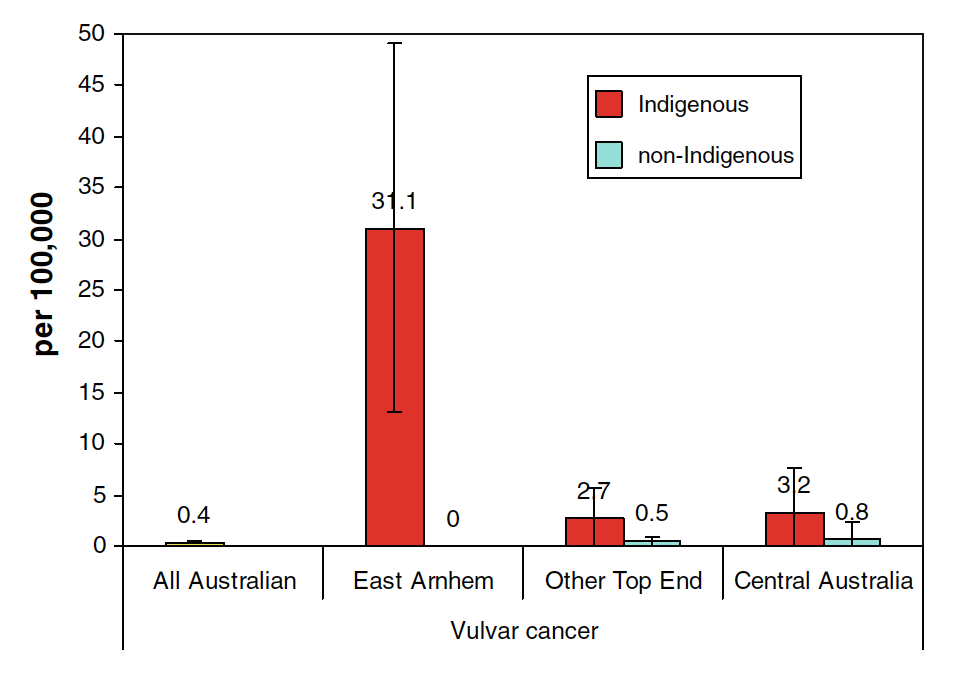 The incidence of vulvar cancer in NT women aged less than 50 years (Indigenous and non-Indigenous women combined) is the highest in the world (Figure 2). 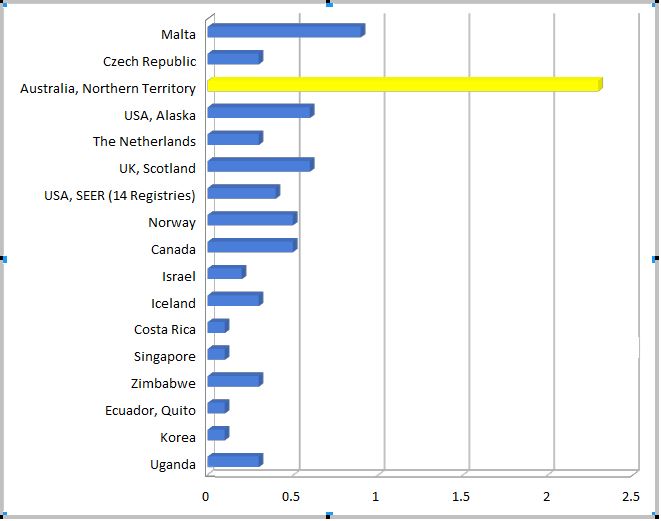 Given that excess of vulvar cancer was restricted to younger women (aged less than 50 years), it was hypothesized the increased incidence of vulvar cancer in this population was the result of either:

HPV16 was the most common type detected in both sites. There is some evidence to suggest that persistent infection of HPV16 at the vulva but not cervix may contribute to the excess. Investigation of this possibility in the EA population would require a long-term prospective longitudinal study, the feasibility of which has not been assessed.

Biopsies of vulvar cancer and VIN from women from EA and from other regions of the NT were genotyped for HPV.13 Biopsies from Arnhem Land were similar to those from other regions in the detection of any high-risk (HR) or possible HR and detection of HPV 16 specifically (Table 1). All HPV 16 variants detected were of the European prototype.

These findings indicate that HPV is likely to be involved in the aetiology of disease in this population, but neither a higher prevalence of vulvar infection with HPV nor a particularly virulent strain of HPV explains the extent of the excess incidence of vulvar cancer in Indigenous women in EA.

It is expected that the vaccination of young people against HPV will contribute to a decline of vulvar cancer in this population, although there is insufficient data to quantify the expected decrease. The new nonavalent vaccine, currently being introduced, will likely increase the effectiveness of vaccination in relation to vulvar cancer, as it targets a wider range of HPV types.14 HPV vaccination has been available to women currently (in 2017) aged under 35, because vaccination was offered to women aged up to 26 years when the vaccine was introduced in 2007. Women currently aged over 35 have no vaccination protection.

A qualitative research study was undertaken through in-depth, open-ended interviews with purposively recruited participants including women who had had IVC or VIN, Aboriginal Health Workers, and doctors and nurses involved in caring for affected women. This study identified factors affecting diagnosis and treatment of women with vulvar cancer or VIN in EA communities, including: the private nature of the disease, the sense of shame associated with the condition, limited resources for health service delivery in EA, and a range of issues associated with the experience of relocation to metropolitan centres for treatment and specialist care.15,16 Interviewees were also asked about possible environmental exposures that might be contributing to vulvar cancer development, but no promising candidates for further investigation were identified.

Gynaecologists from the Outreach Service reported that vulvar dysplasia appeared to cluster within particular family groups, suggestive of a genetic risk factor causing an inherited susceptibility, either to the oncogenic effects of HPV, or perhaps to another cause of vulvar cancer. Given the features of the disease in this population, it was hypothesised that any causative genetic variants were likely to be rare, to have a large effect size, and to stem from a mutation in a common ancestor.

A genetic case-control study of the vulvar cancer cluster was undertaken in 2011-2013, in which saliva samples were collected from 30 cases of vulvar cancer or VIN resident in the affected communities, and 62 unaffected controls, matched on age and community of residence.17 Genomic DNA was extracted from the samples, and genetic profiles generated by single nucleotide polymorphism genotyping using Illumina HumanOmni 2.5 BeadChips. Genome-wide association and identity-by-descent analyses, adjusted for relatedness within the sample, identified genomic regions of interest that are strongly suggestive of the involvement of a genetic risk factor.

More detailed genetic profiling was undertaken in 2014 using whole genome sequencing of 23 cases and 9 controls, and subsequent analyses have employed a variety of bioinformatics pipelines to prioritise variants of interest; this was a challenge given how little is known about normal genetic variation within this population. A group of four affected sisters was used as an initial filter, and then widened to include the whole sample. This approach identified a group of genetic variants in over 20 genes, the majority of which are involved in urogenital cancer pathways. These results indicate that, rather than one or two variants of large effect size, this cluster may be driven by the cumulative burden of rare functional variants.

Further whole genome sequencing is currently being undertaken in additional individuals to increase the sample size and allow a formal statistical ‘burden’ test to be completed prior to undertaking functional studies. The findings of the functional studies will assist in characterising the aetiology of this poorly understood malignancy.

An increased prevalence of immunosuppressive conditions (such as diabetes, HTLV-1 or HIV) could also contribute to higher incidence of vulvar cancer.11 No case of HIV has ever been notified for an Indigenous person resident in the EA health district (pers. comm., P. Markey, 2017). Human T-Lymphotropic Virus-1 (HTLV-1) is endemic to Central Australia, but is virtually unknown in both East Arnhem and West Arnhem districts.18 Diabetes is more common in Indigenous Australians, particularly those living in remote communities; however, the prevalence of diabetes in EA has been estimated to be half that of Central Australia.19 Taken together, this suggests that immunosuppressive conditions are not the driving force behind this cancer cluster.

Women who participated in the genetic study were asked about their smoking status, and data relating to sexually transmitted infections and other HPV-related neoplasia (e.g. cervical, vaginal, perianal, anal or oropharyngeal) were extracted from their medical records.17 No association was found with any of these factors and diagnosis with VSCC or VIN except for previous diagnosis of cervical intraepithelial neoplasia (CIN). It is worth noting that the very high rates of smoking and STIs in this population may obfuscate any association between these factors and vulvar cancer. However, rates of smoking and STIs are also high in other remote Indigenous communities that do not experience a high incidence of vulvar cancer.

In recent years, the difference in vulvar cancer incidence between Indigenous and non-Indigenous Australians in the NT has been gradually diminishing.

This apparent reduction in the gap in vulvar cancer incidence between East Arnhem and other Top End Indigenous women may be the result of increasing incidence of vulvar cancer worldwide (particularly HPV-dependent VSCC) in recent decades.2-4,20,21 Further, the increased attention to vulvar cancer prior to the first analysis may have led to increased ascertainment of cases in NT women outside Arnhem Land.

The differences in the natural history of HSIL (uVIN) and dVIN have resulted in different approaches to treatment. HPV-dependent HSIL has classically been known to develop slowly, occasionally spontaneously regress, and be less likely to progress to invasive cancer than HPV-independent dVIN.22 Thus, HPV-independent lesions have demanded immediate surgical treatment, whereas HPV-dependent uVIN could be treated with topical immune modulators (e.g. imiquimod) and monitored for longer periods before intervention. In this population, however, the unusually aggressive nature of the disease indicates that treatment needs to be prompt and thorough.

In collaboration with the Department of Health, the project team initiated a disease control program in 2006, focused on early detection and treatment. This comprised two main streams of activity: a community education program and a staff training program.

Raising and maintaining awareness of the increased incidence of vulvar cancer in Indigenous women resident in the EA district has been a priority. The sense of shame associated with the disease and the limited access to healthcare in these remote communities may contribute to delays in seeking treatment. With no choice of doctor in many remote communities, women in Arnhem Land would, for instance, have difficulty talking to a male clinician about an issue deemed to be ‘women’s business’. To overcome these barriers, the community education program has focused on:

This has been effected through a combination of community based events and the development of resources to remain in the communities (Figure 3). Women’s cancer education events have been held periodically throughout the life of the project, often in conjunction with the Sexual Health Coordinator from the Centre for Disease Control Nhulunbuy, who offered Well Women’s Checks to attendees for opportunistic screening.

The resources for the communities have evolved over time: from an illustrated flipchart in English and Yolngu Matha; to an audio book with illustrations and recordings in English, two dialects of Yolngu Matha, and Anindilyakwa; to an animation in English and Yolngu Matha. While the first two iterations proved useful and culturally appropriate, the physical nature of the resources meant they were easily lost, particularly in clinics with high staff turnover. The animation will be hosted on the Menzies website, and will remain more democratically accessible to clinics, healthcare workers and community members on phones, tablets or computers. 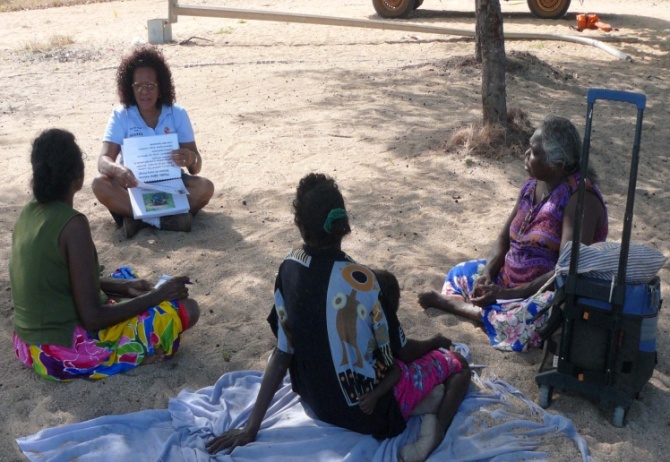 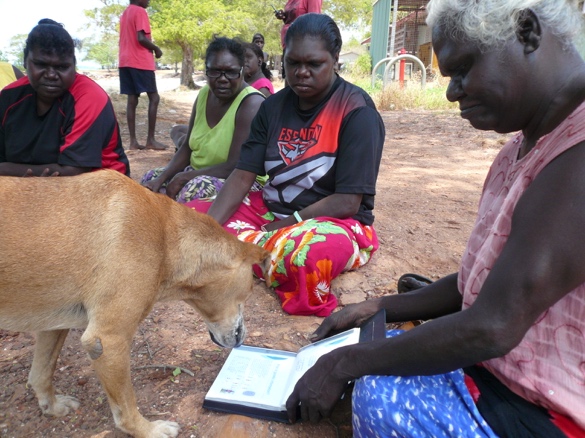 Early detection and treatment relies on primary health care staff being aware of the need to look for signs of vulvar dysplasia, and how to identify it. Clinics in remote communities in the Northern Territory experience exceptionally high turnover of staff. Half of all nurses and Aboriginal health practitioners working in remote clinics leave within four months, 66% leave remote work altogether each year, and individual clinics can experience a 128% turnover of staff in 12 months.29 These retention patterns compromise health professionals’ awareness of the cluster and how to identify vulvar dysplasia. The staff training program aimed to:

These goals were achieved through:

The high staff turnover means that these efforts need to be ongoing. We are in the process of updating the training tool, with the aim of increasing its utility in ongoing staff training efforts, and will likely take the form of a web-based application.

Sincere thanks go to our Indigenous Reference Group, the participating communities across East Arnhem and Groote Eylandt, and all the women who have participated in these studies. 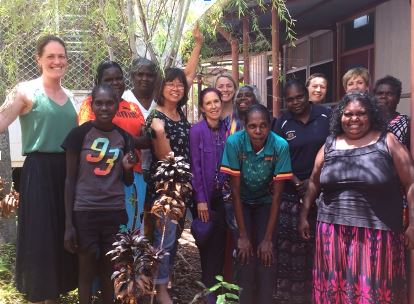 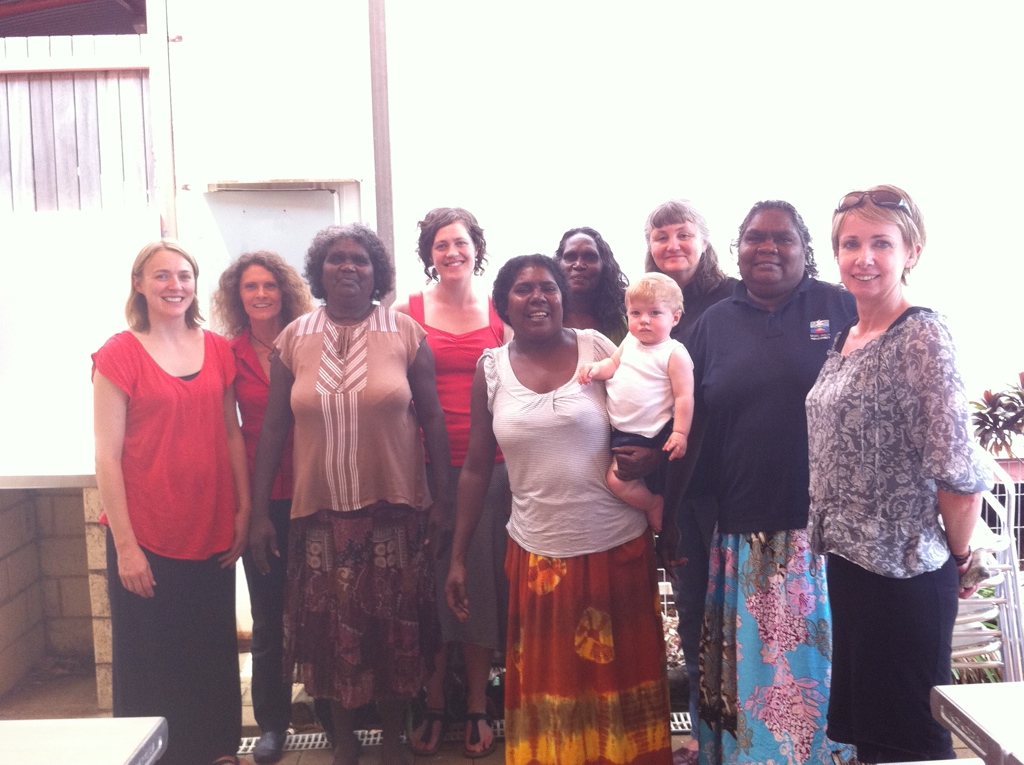 NHMRC funding supports research across the full spectrum of health and medical research, from basic science through to clinical, public health and health services research. The research projects investigating the East Arnhem vulvar cancer cluster were funded by NHMRC project grant numbers 436013, 1003817 and 1060187.